My latest commission was for runner from my local club – something to commemorate his favourite running routes in the area, from Richmond Bridge to Hampton Court, the surrounding sights, parks and wildlife that roams within. 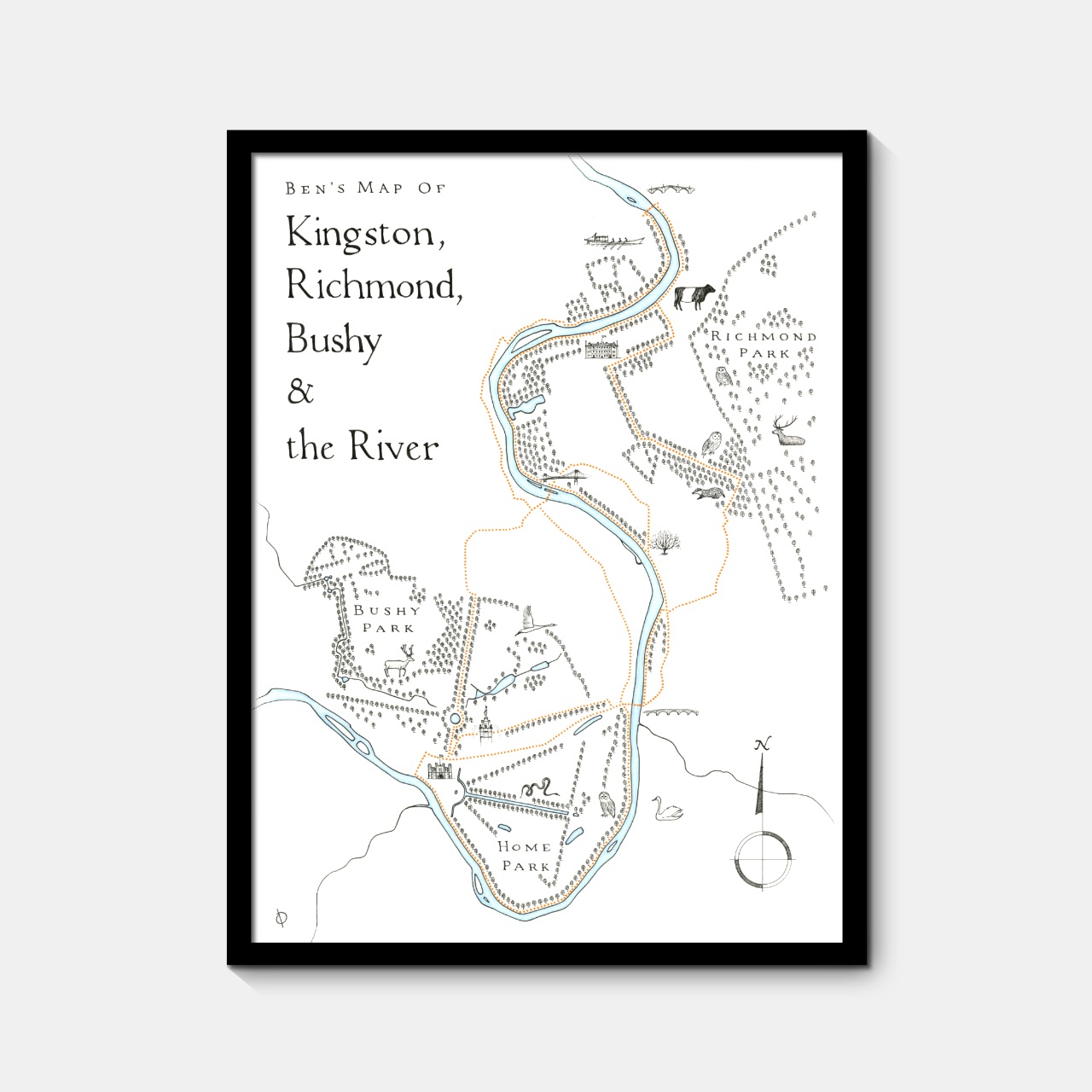 I've mapped this bit of the Thames quite a few times in the past, as commissions and for some of my own personal projects. I can't seem to get enough of it. It's a beautiful area, so much open space to wind down, and lots of history and nature to explore, from the parks and palaces, to the huge variety of birds and wildlife. Always feels like a perfect area to map.

Bushy is my home, both as a child until leaving school, and now as an adult having resettled here around 15 years ago. I grew up exploring the park, from the woodlands to the water features. The Longford River cuts through the park, feeding the ponds and flowing into the Thames at Hampton Court. Historically also known as The King's River, The Queen's River, The Cardinal's River, and New River, the Longford as we now know it was actually man made, originally built in the 17th century at the order of Charles I, to bring water from the River Colne near Heathrow, to Hampton Court. I've included most of the park's key water features here, and illustrated two of the creatures you'll often see by them – a fallow deer and white swan. 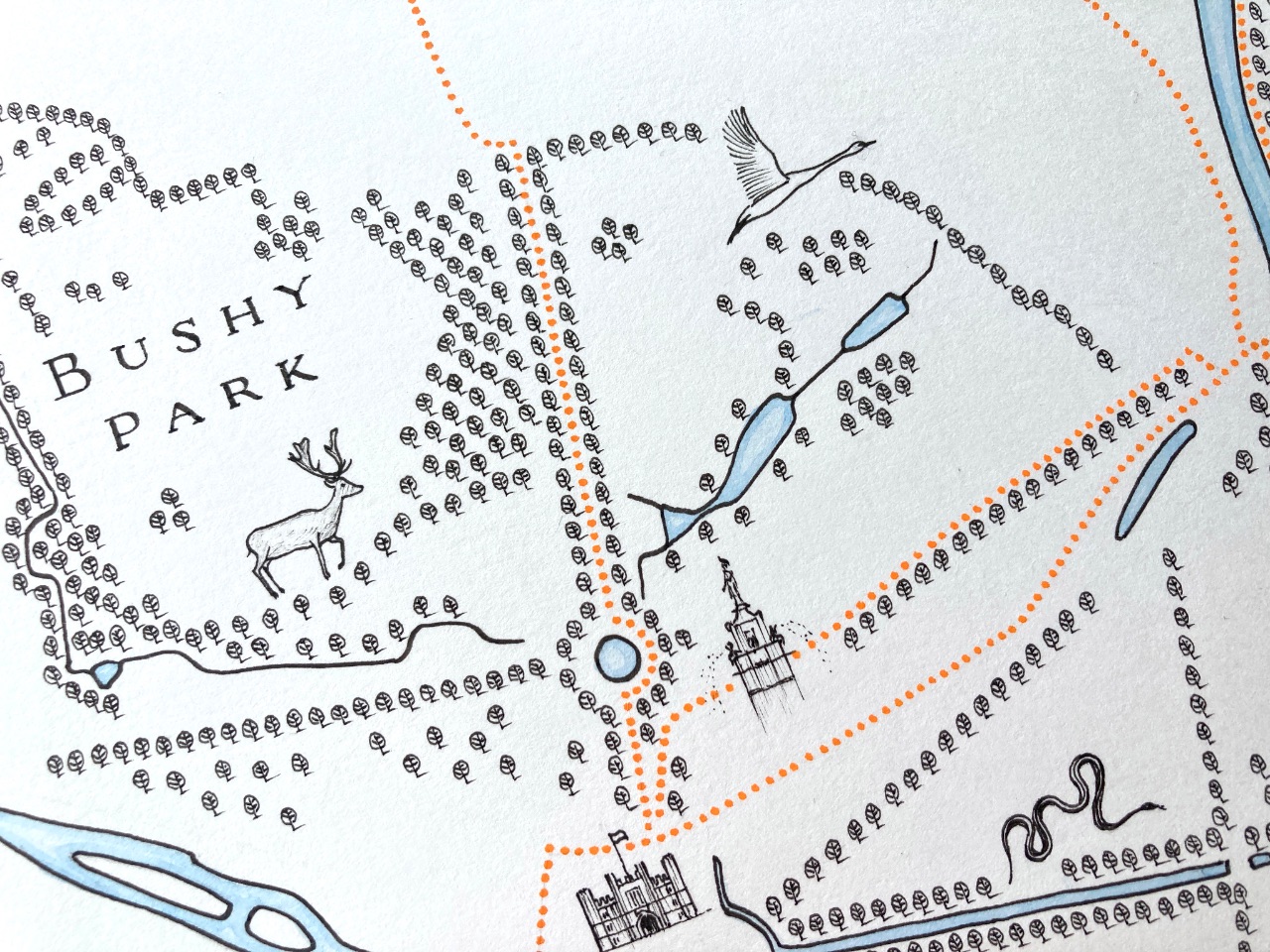 The Longford flows under the road, between the walls, into Hampton Court Palace's Home Park and the Long Water. It enters the Thames here as well as a little further upstream by Taggs Island. Ben had spotted a grass snake in Home Park, which I've illustrated alongside the Long Water, and a Tawny Owl near the towpath towards Kingston. I also opted for a swan on the opposite side of the river, always a popular spot for them. 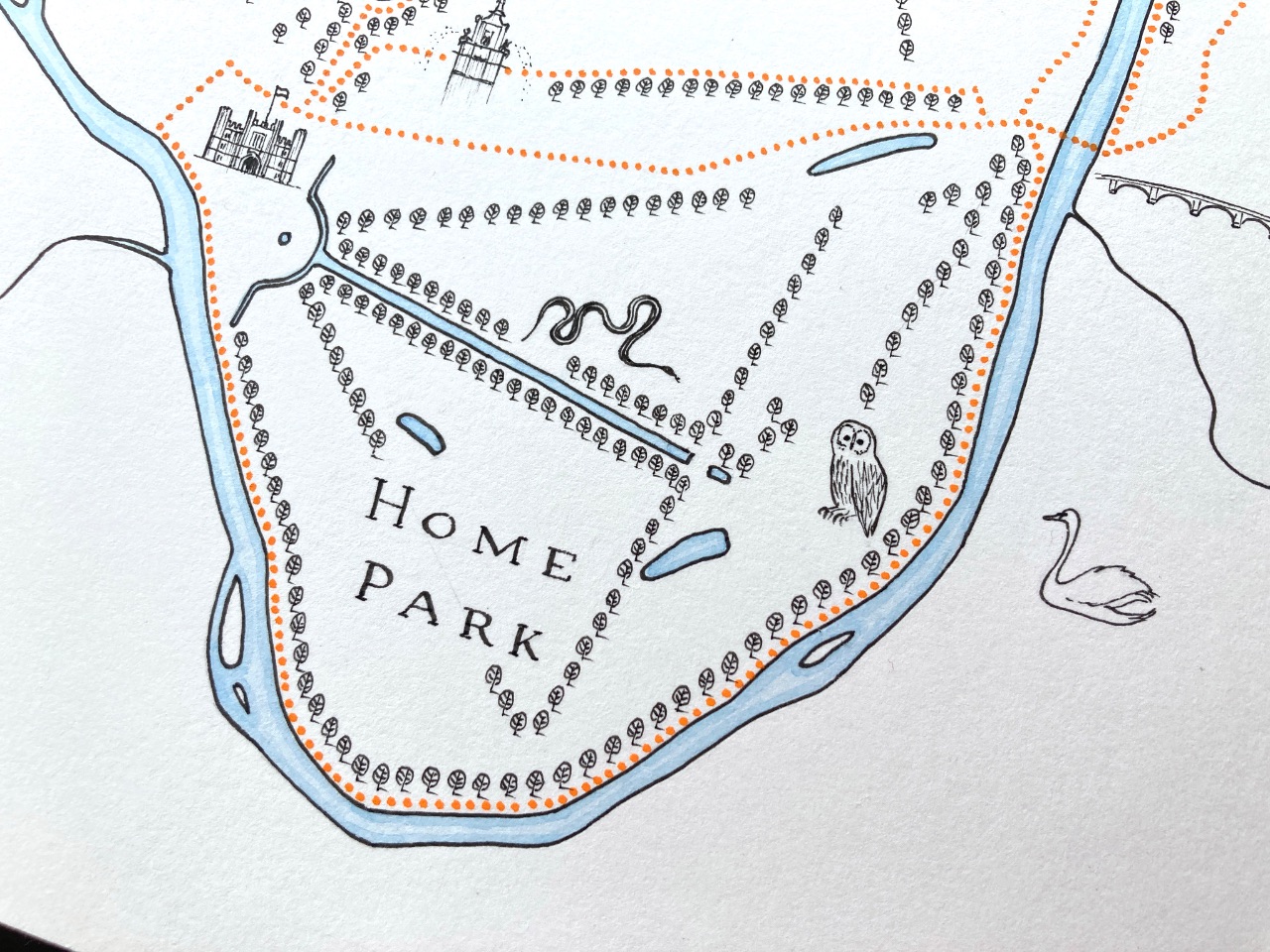 Further along on the north side of the Thames, Ben's routes take us past the Half Mile Tree. Or at least where it once stood. It was an old (very old ~500 years) elm tree, known as the Half Mile Tree as it marked a spot around half a mile from Kingston. It had got into a dangerous state of decay and was replaced in the middle of last century. You can see it marked on this early OS map: 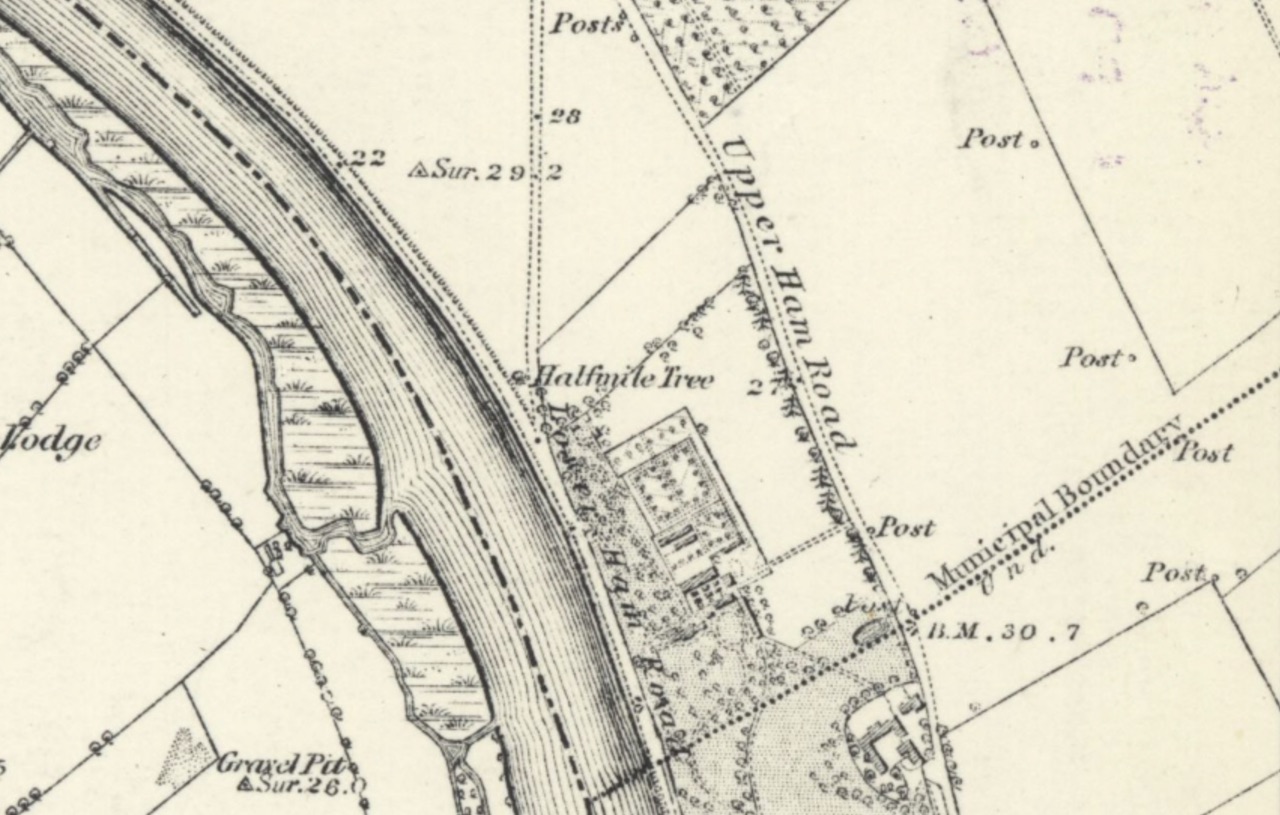 Beyond that I've illustrated the badgers and owls that Ben has seen around Ham Common woods and Richmond Park. Along with the obligatory red deer stag. 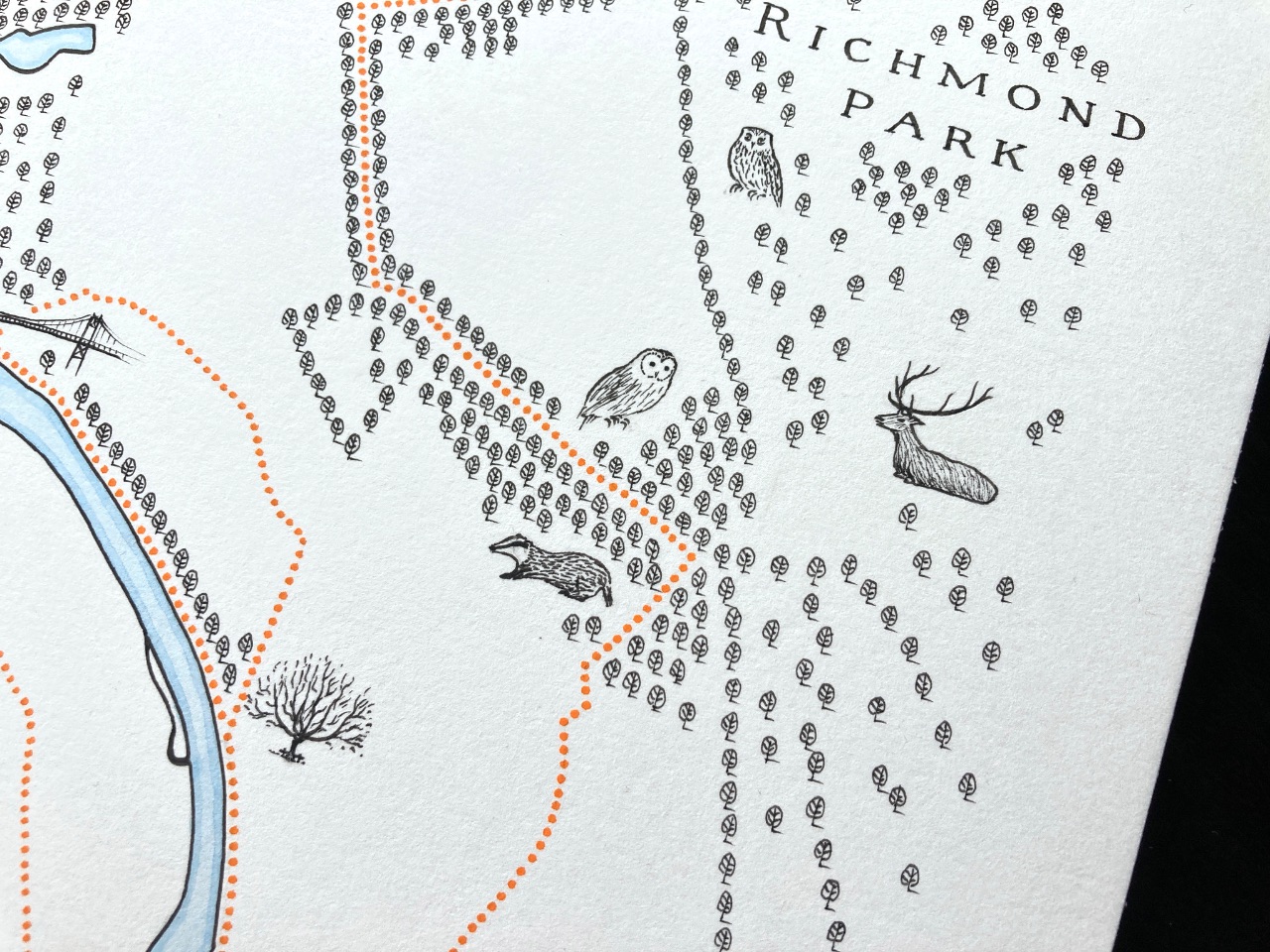 A little further north takes us to Petersham Meadows by Richmond Park, where like Ben you'll often spot the Belted Galloway cows.

I've also then illustrated the Jubilant rowing boat, which Ben has taken out with the cubs near Richmond Bridge. 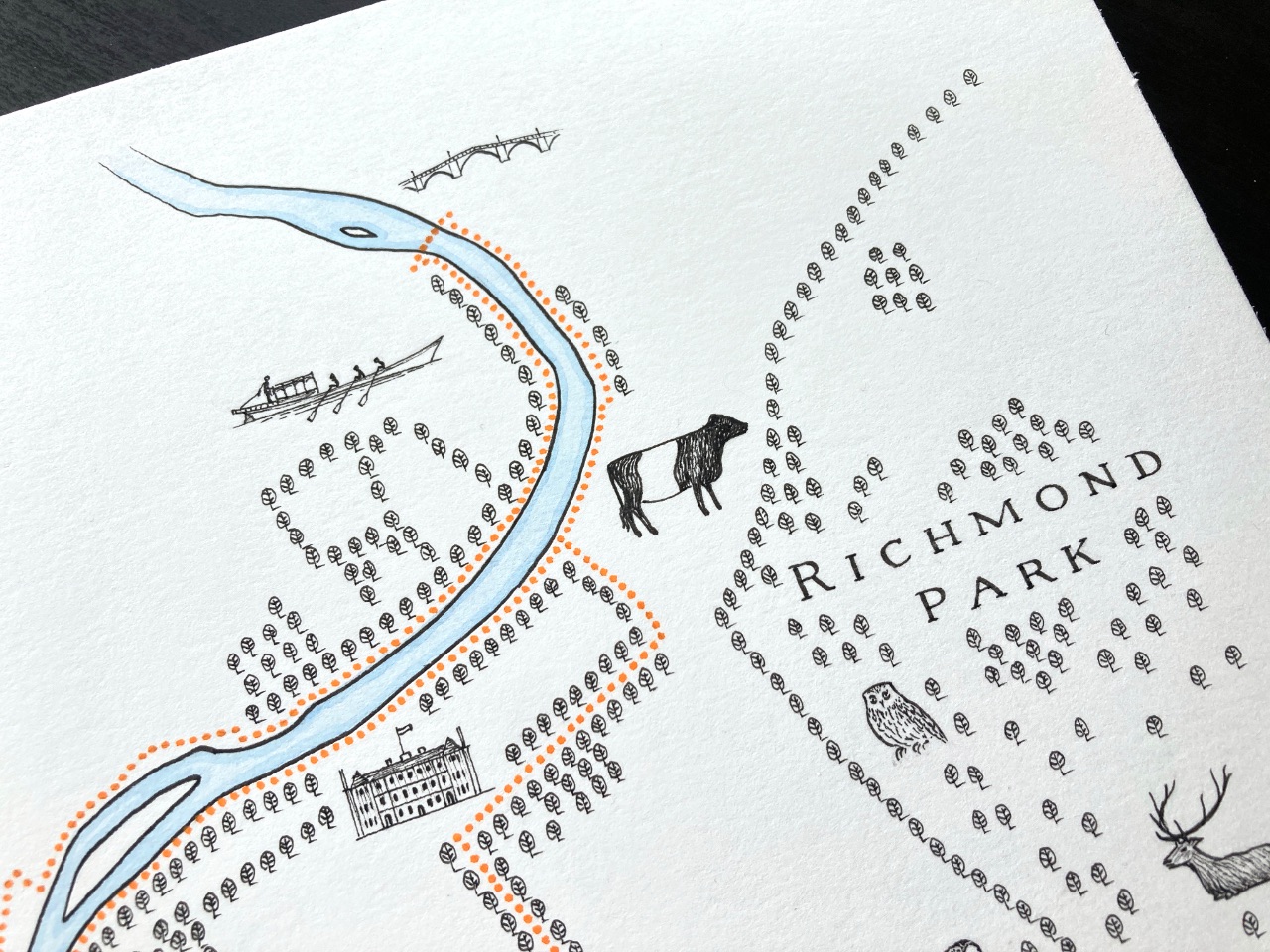 You can watch a timelapse video of the entire process of creating this map here.

Always a pleasure working on something close to home like this. Reminds me of why I love living here.

Up next this week is a secret gift commission so will reveal more about that later... 🤐